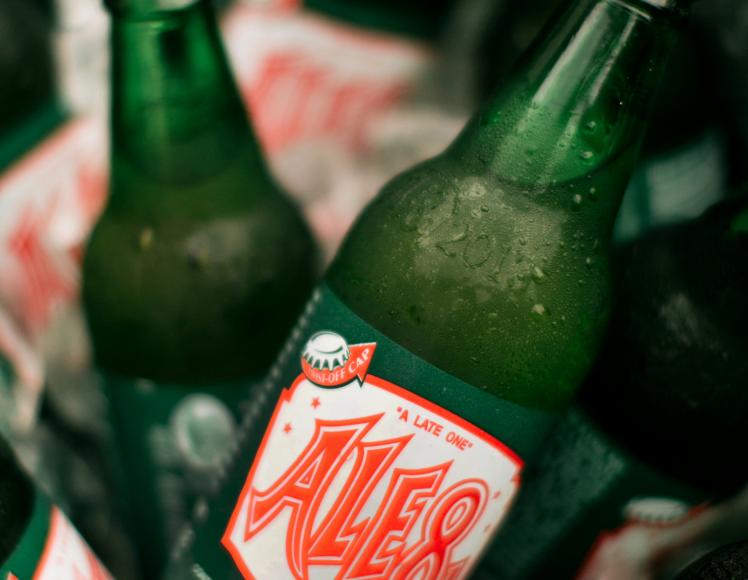 Ale-8-One soft drink has been bottled in Winchester since 1926 and is the only soft drink invented in Kentucky still in existence.

Founder and inventor G. L. Wainscott began bottling soda water and several flavored drinks in a plant on North Main Street in Winchester, Kentucky, in May 1902. In 1906, he introduced Roxa-Kola, a popular rival to the cola drinks then available.

After an ensuing court battle over the production of Roxa-Kola, Wainscott searched for a unique flavor for his soft-drink business. Experimenting with ginger-blended recipes acquired during extensive travels in Northern Europe, Wainscott developed the Ale-8-One formula. The product was launched July 13, 1926, and Wainscott sponsored one of America’s first “slogan” contests at the Clark County Fair. “A Late One,” the winning entry, was a pun adopted for its description as the latest thing in soft drinks.

By 1935, Wainscott had converted a livery stable on West Broadway in Winchester and moved his growing bottling operation to it, where it thrived for thirty years until the company built a new plant on Carol Road in 1965. Roxa-Kola was discontinued in 1968, and production ceased on the remaining Wainscott flavors in 1974, when Wainscott’s great nephew Frank A. Rogers III joined the company’s management.

Two years later, a warehouse was constructed on an adjacent lot, and six years after that, a two-story syrup room was added to the main building. In 1989, the company built an extensive addition, which tripled warehouse space and includes a two-story office building.

In 2002, the Ale-8-One Bottling Company signed a distribution agreement expanding Ale-8-One’s territory to include 61 counties of Ohio, Indiana and Kentucky. The Louisville and Cincinnati metro areas were included in this expansion as well as Eastern Kentucky regions of Ashland, Pikeville and Hazard.

Expanding the distribution territory was followed by expanding the product line. Diet Ale 8 was introduced and Rogers’s oldest son, Fielding, was named vice president of the family business in 2003. The formula for Diet Ale 8 was perfected after years of extensive research and development. Diet Ale 8 was the first new product from the company since Ale-8-One was launched in 1926. State-of-the-art sweeteners, including sucralose (Splenda®), were chosen for their qualities to sweeten without leaving the aftertaste commonly associated with aspartame. Further, Diet Ale 8 contains no calories or aspartame.

Ale-8-One celebrated its 80th anniversary in the summer of 2006. That same year, two additional products were commissioned bearing the logo and including Ale-8-One ingredients. Ale-8-One suckers were re-introduced after an 18-year lapse by Ruth Hunt Candy Company in Mt. Sterling, Kentucky. In addition, through interaction and affiliation with the Kentucky Department of Agriculture’s Kentucky Proud program, Ale-8-One salsa was developed incorporating Kentucky-grown produce and components.

Fielding A. Rogers, oldest son of Frank A. Rogers, became president of Ale-8-One Bottling Company in October of 2009. He is the great, great nephew of G. L. Wainscott and still mixes up the closely guarded family secret using Wainscott’s hand-written notes.

Tours of the factory are offered on Thursday and Friday mornings by appointment. Tours are free and last 30-45minutes.  To schedule a tour call (859) 744-3484 or email us at tours@ale-8-one.com.  The Ale-8-One Company Store is located in the main office building at 25 Carol Road, Winchester, Kentucky. The Ale-8-One Company Store features many interesting specialty items and memorabilia. It is open to the public Monday-Friday, 8:30-4:30 p.m. If you live in an area where Ale-8-One is not yet available, you may call (859) 744-3484 to place an order for Ale-8-One to be delivered to your home via UPS or visit place your order securely online.