From the original KFC to soul food joints to fine dining, sink your teeth into some of the best fried chicken in America. 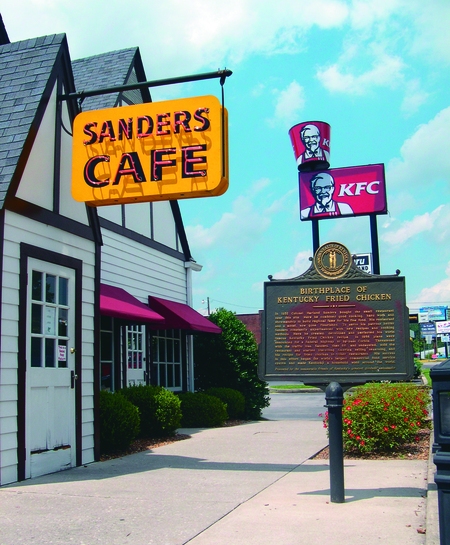 The famous recipe that launched the Kentucky Fried Chicken empire began back in 1930 at Col. Harland Sanders' original restaurant in Corbin, and eventually put Kentucky on the map as the place for fried chicken. But that legacy extends far beyond the Colonel; long before you could get red-and-white buckets of KFC just about anywhere, Kentucky’s homegrown cooks had their own prized recipes. The World Chicken Festival – held every September in London, Kentucky – features live music, family fun and all the crispy-fried fowl you can eat.

Buckle up for this crunchy, juicy road trip to the best fried chicken spots in Kentucky. Whether you like it mild or spicy, white meat or dark, served in buckets or on fine china, there’s a chicken joint for you. Just be sure to ask for extra napkins!

The biggest name in fried chicken began at a humble service station in Corbin with a single dining table for travelers. Before long, Harland Sanders expanded to this restaurant, which is now on the National Register of Historic Places. Even if you’ve eaten Kentucky Fried Chicken all your life, visiting the place where it all began is a true Bluegrass “bucket” list item.

In the heart of Horse Country, the James Beard Award-winning Beaumont Inn is one of the most elegant and historic restaurants in Kentucky. Their famous Yellow-Legged Fried Chicken has been passed down (and perfected) through five generations of the Dedman family. The Beaumont Inn is also an official stop on the Kentucky Bourbon TrailⓇ, making it even more of a must-stop.

You can go to Blue Isle for lunch or dinner any day of the week, but bring a big appetite for their much-loved Sunday Buffet – piled high with everything from fried chicken to country ham to all the fixings, including mashed potatoes, greens and macaroni and cheese.

This classic 1950s drive-in has been featured on multiple Food Network shows, including “Diners, Drive-Ins and Dives.” Their burgers, like the double-decker Poor Boy, get a lot of love, but the fried chicken is cooked to golden, glistening perfection. Pick and choose your favorite parts, or get adventurous with fried livers and gizzards.

Local Feed is tucked in an 1890s ice house, right across the street from the spring where Elijah Craig reportedly pulled water to first make bourbon. But despite all that history, this trendy Georgetown eatery puts a contemporary spin on scratch-made Southern classics – from chili-maple chicken and waffles to skillet cornbread with sorghum butter.

As Colonel Harland Sanders was building his chicken empire, his wife, Claudia, opened this elegant restaurant, which specializes in Southern recipes ranging from Kentucky ham and biscuits to BLTs—and, of course, finger-lickin’ fried chicken. Stop by for lunch or family-style dinner, and take home Mrs. Sanders’ cookbook to recreate her best-loved dishes at home.

“Like coming home to dinner” is how Shirley Mae’s Café describes the experience at this welcoming soul food institution in Louisville. Presided over by Chef Shirley Mae herself for more than 30 years, the café uses only fresh ingredients – nothing canned or frozen here – for its Southern staples, like chitterlings, barbecued ribs, pan-fried chicken wings and a variety of decadent desserts.

A Bardstown staple since 1937, this family-owned restaurant has a massive following for its skillet-fried chicken, Kentucky country ham, cornbread and homemade cobbler. Located in the heart of Bourbon Country, Kurtz’s is a great place to fill your belly before a distillery tour.

Fans of "Diners, Drive-Ins & Dives," here's another one for your list: Guy Fieri raved about the Big Brown Burger at Wallace Station Deli so much that he gave it a coveted spot on his all time top five. But in-the-know Kentuckians flock here on Mondays for the weekly Fried Chicken Dinner, sizzled to perfection by renowned chef and restaurateur Ouita Michel.

Chef Edward Lee, who has appeared on cooking shows like “Top Chef” and “Mind of a Chef,” puts an Asian spin on Southern classics at this Louisville hot spot. Must-eats include the Gochujang Fried Chicken, Sweet Tea Deviled Eggs with Country Ham, and pork shoulder drizzled with curry oil. Don’t miss the craft bourbon cocktails, too.

There’s a whole lotta history at the Merrick Inn, which was built before the Civil War and for generations served as the manor house for one of Lexington’s most celebrated horse farms. The food offerings are just as classic, including the famous fried chicken and appetizers like fried green tomatoes and beer cheese.

Northern Kentucky’s most award-winning restaurant has perfected a few things over the years, and the menu is stuffed with traditional Bluegrass favorites. Stop by on Mondays and Tuesdays for family-style fried chicken with mashed potatoes and gravy, green beans, coleslaw and biscuits.

One of Louisville’s favorite fried chicken spots (some even say the best in town), this no-frills restaurant offers chicken boxes, dinners and wings at super-affordable prices. And if you need a little break from the fried variety, Chicken King also serves delicious baked Jamaican Jerk, Herb-Roasted and BBQ chicken.

Don’t be surprised – or discouraged – if you see a line at Dasha Barbours Southern Bistro. This popular soul food spot draws big crowds for its famous fried chicken and wings, and we think it’s worth the wait. Diners also rave about the sides, especially the sweet potato casserole.