Cave City: Where Else Can You Play Above Ground and Under It?

By: Kathy Witt and Sharon Tabor 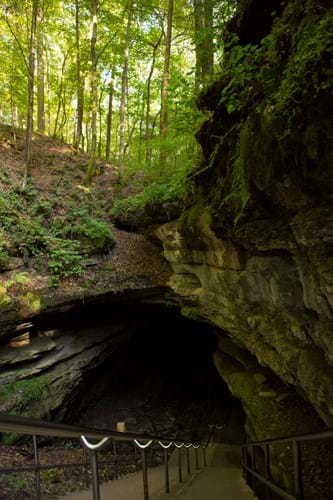 If there’s a time and place where you can get away with gasping “AWESOME!” without it sounding overwrought, it’s when you’re standing amidst the stalactites, stalagmites, travertine dams and other geologic wonders within Mammoth Cave National Park. This 53,000-acre treasure bordering Cave City is one place that fully embodies the meaning of the word.

The world’s longest cave system is sheer grandeur, with 4,000 known passages and 400-plus mapped trails. It is also one of the oldest tourist attractions in North America; visitors have been exploring its vast subterranean depths since 1816.

Today, you can view the same spectacular formations that wowed guests nearly 200 years ago – whether your taste for adventure runs on the mild or wild side.

You can go easy or strenuous – with or without a lantern – as you walk, hike, climb and sometimes squeeze through formations with names like Fatman’s Misery and Bottomless Pit. There are themed walks and talks, including those on slavery and the Civil War. Cave newbies should try the Frozen Niagara Cave Tour – it’s as stunning as it sounds and not at all strenuous, so everyone can enjoy it. History buffs will be intrigued to learn about the one-time tuberculosis hospital in the cave.

A World Heritage Site and International Biosphere Reserve, Mammoth Cave is a source of awe-inspiring wonder to the 500,000-plus who visit each year. And with eight caves within 45 miles – Mammoth, Hidden River, Lost River, Outlaw, Onyx, Cub Run, Diamond Caverns and Mammoth Onyx Cave at Kentucky Down Under Adventure Zoo – the Cave City area is a breathtaking example of what Mother Nature can do when left to her own devices.

For a Jurassic Park Adventure 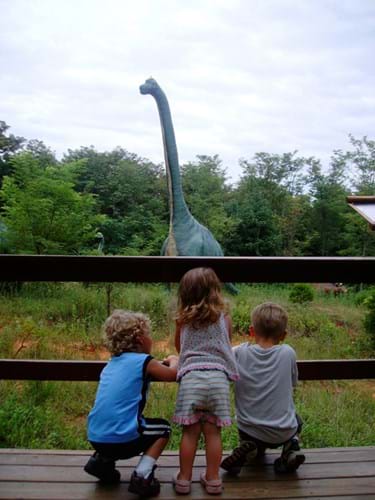 A visit to Mammoth Cave should top your must-see list of Cave City, KY attractions, but there are other things to do and see (both underground and above) that you won’t want to miss.

And one you simply can’t miss! You’ll see T-Rex peeking from the treetops as you drive along I-65. Dinosaur World features life-size replicas of 150 such behemoths, including brachiosaurus and triceratops, lumbering through a lush setting. Dig for shark teeth and brachiopods, see raptor claws in the museum and fossil shop for your budding paleontologist. 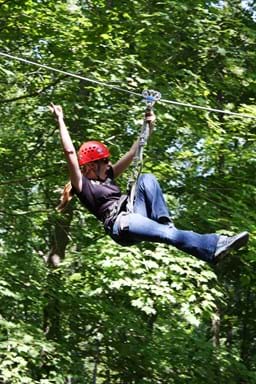 Cave City is also known as Kentucky’s Zipline Capital thanks to three ziplines located within five miles of each other at Mammoth Cave Adventures, Hidden River Cave and Kentucky Action Park, an adventure hub where bandit Jesse James once roamed.

Zoom down Kentucky’s only alpine slide. Race go-carts, bumper cars and boats. Relax on a mountainside chairlift. Try your hand at canoeing and miniature golf.

After the underground and above ground thrills, explore on the Green River water trails with Green River Canoe, or the backwoods outside Mammoth Cave National Park with a four-legged friend at Jesse James Riding Stables in Cave City.

See? You really can use the word “awesome” as much as you want when visiting Cave City. From the mysterious and cavernous world below to thrills and shrills above, it just fits. Make sure Cave City is on your list of future travel destinations – you’ll find events and activities for the whole family!